Daylight saving time (DST)—also called summer time is the practice of advancing one hour the clocks during the summer period, in order to extend the sunlight in the afternoon and reduce it in the early morning. The modern society operates on the basis of “standard time” (e.g. work, school, transport…) rather than the “solar time”, however in non-equatorial regions the total number of hours of sunlight in a day vary a lot during the year.


Usually people sleep from 11pm till 7am so, with the solar time they would lose part of the daylight hours whereas if the hours are shifted to the evening via DST they can be better used.
In Europe, Daylight Saving Time starts on the last Sunday of March and ends on the last Sunday in October.

The idea of Daylight Saving was founded by Benjamin Franklin, the publisher of the old English proverb, “Early to bed, and early to rise, makes a man healthy, wealthy and wise”.  With this solution it was possible to save coal, at that time used both to feed the stoves and the steam machinery of the industries. During the first World War almost all the countries involved adopted this mode because of the cuts required: it was possible to get more coal without increasing the burden on people’s lives. Modern DST was first proposed by the New Zealand entomologist George Vernon Hudson, whose shift-work job gave him leisure time to collect insects, and led him to value after-hours daylight. Shortly after Russia and United States adopted the DST.

Daylight Saving Time has caused controversy since it began. Winston Churchill argued that it enlarges “the opportunities for the pursuit of health and happiness among the millions of people who live in this country”  and pundits have dubbed it daylight saving time. Historically, retailing, sports and tourism interests have favoured daylight saving, while agricultural and evening entertainment interests have opposed it, and its initial adoption had been prompted by energy crisis and war.

Who adopt the DST 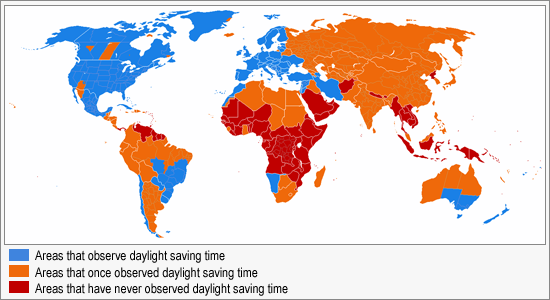 Changing clocks and DST rules has a direct economic cost, entailing extra work to support remote meetings, computer applications and the like. For example, a 2007 North American rule change cost an estimated $500 million to $1 billion. Although it has been argued that clock shifts correlate with decreased economic efficiency, and that in 2000 the daylight-saving effect implied an estimated one-day loss of $31 billion on US stock exchanges, the estimated numbers depend on the methodology and the results have been disputed. 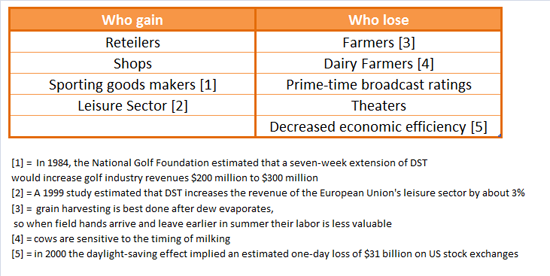 In 1907 in England, among the senators in favor of the proposal for the introduction of summer time there were Balfour, Churchill, Lloyd George, MacDonald, Edward VII, the managing director of Harrods, and the manager of the National Bank, but the opposition was stronger: Prime Minister Asquith, Christie (the Astronomer Royal), George Darwin, Napier Shaw (director of the Meteorological), many agricultural organizations, and theater owners. It is quite clear that the industrial areas have always been more interested in the application of the DST and, on the other hand, rural areas have been adverse (in 1992 a referendum was voted in Queensland, Australia, with rural areas strongly in opposition and the metropolitan ones in favor). The fact that a specific part of the community is oriented to the use of daylight saving combined with the savings of only 2/3 thousandths of annual consumption suggests that there are different interests.

Especially in the summer, 60 more minutes of light combined with hot, push everyone to use the car more often (with its fuel consumption), to take advantage of various types of electronic equipment (such as air conditioning) and to attend to a greater amount  of evening playful activities: entertainment, leisure and show. Even if you are not at home with the lights on, there still is a waste of money in many other things.

In 1999, the European Commission commissioned a study to assess the impact of daylight saving on energy consumption. Result: average savings of 0.3% in terms of less light, but growth in traffic during the evening hours and use of artificial heating in the morning.

Which is your opinion?

Do you believe in your success?

One step away from success

The third rule of success: be yourself

The 5 rules of success

What to do after high school, 3 mistakes...

This website uses cookies to improve your experience while you navigate through the website. Out of these, the cookies that are categorized as necessary are stored on your browser as they are essential for the working of basic functionalities of the website. We also use third-party cookies that help us analyze and understand how you use this website. These cookies will be stored in your browser only with your consent. You also have the option to opt-out of these cookies. But opting out of some of these cookies may affect your browsing experience.
Necessary Always Enabled

Any cookies that may not be particularly necessary for the website to function and is used specifically to collect user personal data via analytics, ads, other embedded contents are termed as non-necessary cookies. It is mandatory to procure user consent prior to running these cookies on your website.